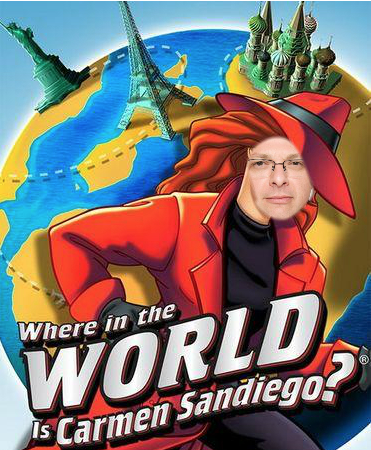 Where in the world is Matt

I am a magician. First, last and always.
I work in comedy and am associated with being a comedian. I’m sold to clients and referred to as a comedian by many people, and agents but at its heart magician always comes first. In the show I’ll make you laugh. I will also amaze you at the end of each piece.  That’s the goal. Always leave them with a sense of wonder.
It’s true; I’ve worked largely in the world of stand up comedy and most of my friends are comedians. I’ve performed at comedy festivals and on comedy-oriented television shows. The perception of my act is that of a comedian that does some magic. I’ve never once gone onstage by myself without doing some magic. That said, it’s also true….I am a comedian…just not one that stands alone at the microphone. Magicians call me a comedian and comedians call me a magician.  No one wants ownership of me.  I’m a man without a country. So be it.

I’ve been lucky. Since I was 16, I’ve never had a job.  Never. Performing for the public is the only job I’ve ever had. I got my driver’s licence and went full time into performing.

Lower middle-class kids like myself grow up low on money and high on ambition.  I admit some ambitions are less lofty than others. I never wanted to Vanish the statue of Liberty like David Copperfield, or star in movies like Bruce Willis, or paint paintings like Bob Ross.
My big dream was one day of visiting everywhere in the world that was mentioned on the opening credits of Where in the World is Carmen San Diego.  WOW I loved that show.

After 29 years of performing full time at corporate events, headlining cruise ships and casino’s and just about any venue you can name, its finally happened. I’ve been to EVERYWHERE in the world Carmen SanDiego has been. Its epic and quite a huge thing for me.  If you’re not familiar with the song, here it is.

Magic gave me that. I owe magic a lot.  I owe it a debt of gratitude. If I were pressed on it I’d say I’ve left magic better than when I found it.  I’m proud of that, but I’m also insanely thankful to it for everything magic had done for me. It’s given me a life that’s paid for houses and cars and allowed my kid to grow up with his mom at home. Its done SO much for me and now its let me round out my childhood dream.  I

See ya on the road !
Good Night and Good Luck,

P.S.
If you want the lyrics to the song by Rockapella, here it is:

Well she sneaks around the world from Kiev to Carolina
She’s a sticky-fingered filcher from Berlin down to Belize
She’ll take you for a ride on a slow boat to China
Tell me where in the world is Carmen Sandiego?

Steal their Seoul in South Korea, make Antarctica cry Uncle
From the Red Sea to Greenland they’ll be singing the blues
Well they never Arkansas her steal the Mekong from the jungle
Tell me where in the world is Carmen Sandiego?

She go from Nashville to Norway, Bonaire to Zimbabwe
Chicago to Czechoslovakia and back!
Well she’ll ransack Pakistan and run a scam in Scandinavia
Then she’ll stick ’em up Down Under and go pick-pocket Perth

She put the Miss in misdemeanor when she stole the beans from Lima
Tell me where in the world is Carmen Sandiego?