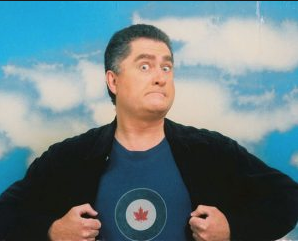 As they should. He was a game changer. A legend to be sure. He could be burry and abrasive at times, especially if he didn’t know you. Meh. Whatever. He was a serious talent.
I’m younger than most of the comics who knew him, and even though I started young, I first got to work with mike when he was already established as a force to be reckoned with. I was maybe 20. Couldn’t believe I got booked with Mike. I was pretty excited. We worked at a casino for a high rollers event. I was out of my league at that time and had no business being on that show. I ate it, a terrible bomb. But Mike. Wow. He destroyed that room. It was the first time I’d ever seen a live comedian get a genuine standing ovation. It was a master class in comedy. He could shift to any gear, wicked funny and insanely physical. I remember thinking he had to be some sort of alien. I’d never seen anything like it at that point.
We had dinner after the show. He had an epipen on the table for some allergy, the type of which I can’t recall. I remember thinking a guy like that couldn’t have a chink in his armour. Food couldn’t take him out. He was just that good.
Unlike most comics at the time, he was nice to me, the variety act. Even though I’d died. He asked me genuine questions and while he at times taking a douchey approach with me, he gave me great advice. I’m not likely to run into someone with his skill set again. He’s going to be missed. All of them are. The great ones. The funny ones. The ones the other comics really dug hanging out with and watching. Kerry Talmage, Flemming, etc. They leave a vacuum. It can’t be filled by anyone.
RIP Mike.
Not gonna be another like you for a long long while.
As Always,
Good night and good luck
Jane Doe