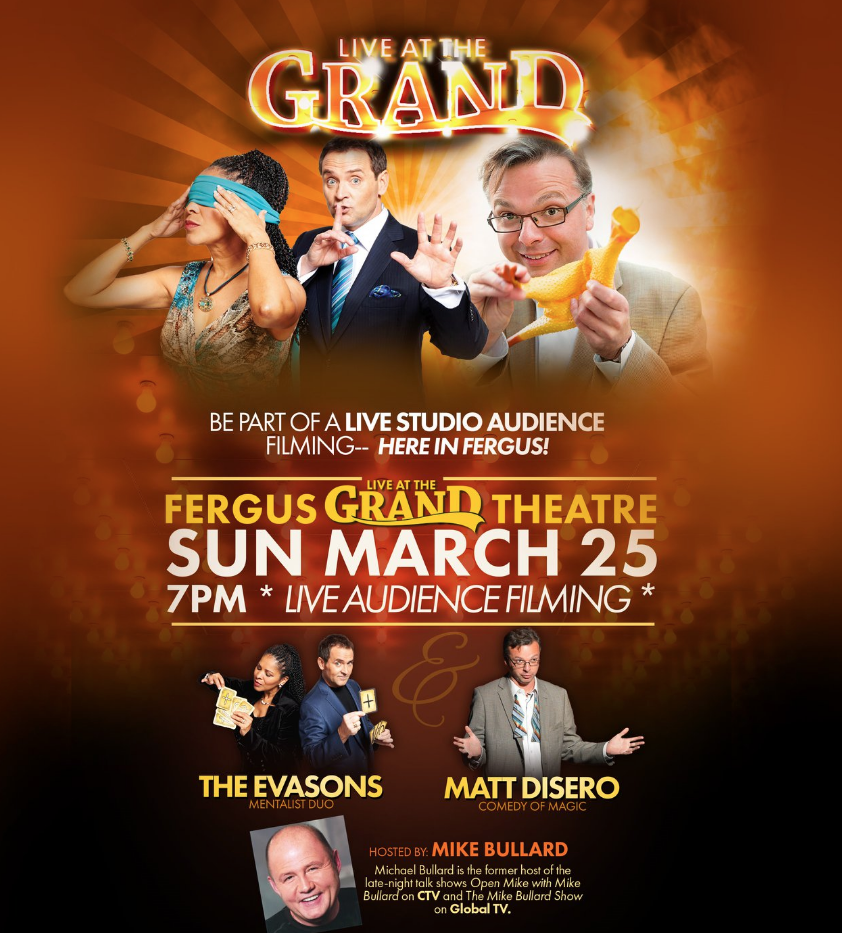 Sometimes it’s worth the trek to nowhere.

This weekend I performed in Fergus Ontario, Its an hour outside Toronto.  Not that far. At the Fergus Grand Theatre, a local producer, Ryan Joyce, shot in 4k video no less, what will soon become a tv show. A show that puts a spotlight on local yet world class Canadian variety acts. Not many true variety shows on television now that don’t pivot on some sort of competition aspect.  This is a real old school variety show. It featured myself, Mentalists Jeff and Tessa Evason, (“The Evasons”), and hosted by Mike Bullard, comedian and former talk show host here in Canada. All three of us friends for many years.

I suppose what I’m saying is that while I love and am constantly honoured to perform at corporate events throughout north America and on cruise lines like Holland America, there’s something to be said for performing with friends. There’s a magic you can’t replace with any other combination of people.

Generally speaking TV shoots are stressful, worrying about make-up and where the cameras are, will your material work, how is it blocked, This type of thing.  When you get the right mix of friends together all that stuff doesn’t even phase you.  I’d actually say Sundays’ taping didn’t even feel like work.

Master of the craft. True original. World class entertainer. These could and often ARE used to describe Jeff and Tessa Evason. What a joy to watch the Evasons share their next level work. History will likely record them as one of the best mentalist couples to have graced the stage. Brilliantly entertaining and mind bogglingly amazing. Always a joy to share the stage with you guys!
You may know, I was on a show last night, taped for TV with The Evasons and hosted by Mike Bullard a brilliant comedian, who’s riffing skills are second to none in this country. If only he could remember to do up his fly. — funniest thing I’ve seen in a long while.
Much thanks to Ryan Joyce and his entire crew for putting together a fantastic night with a brilliant camera and production team. A hat tip to you all, you made me feel like a boss.
Thank you!
I’d do it again in a heartbeat.

Hope it all happens again.  If you’re reading this and you’ve got a variety show you want to put on… I know the Evasons and I are up for it.  Mike Bullard too….. so what the heck… have us perform.  You won’t be sorry.
As always, Good Night and Good Luck,