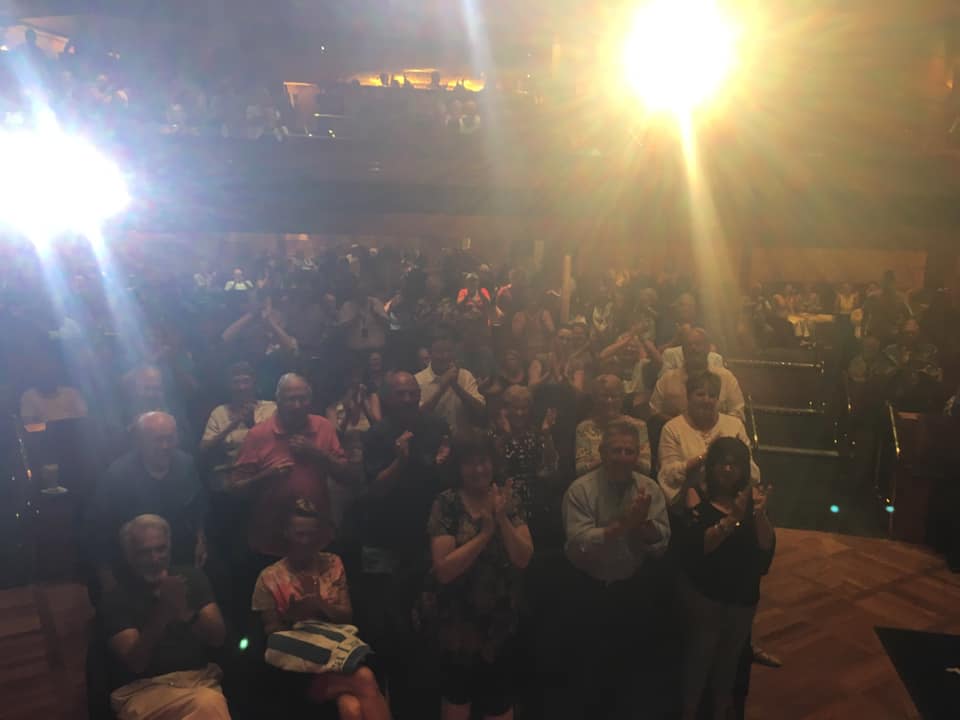 Here’s the thing. I LOVE performing for Holland America.  The theatres and tech crews are amazing, and they treat headline entertainers like me really well.  It’s a joy and an honour to perform on their vessels. In the last 8 weeks I’ve performed on 5 of HAL’s ships.  From the newest ship in the world, The Neiuw Statendam to the oldest and most character filled in their fleet, the Rotterdam. Every single show was fantastic. Each one, without exception. I ended my run of shows with a rousing standing ovation, the photo here is of that very standing o.

Comedy is an interesting beast.  I’ve often heard it said that they (the audience) don’t “stand” for stand up. It’s true. For some reason audiences don’t see comedy as something they should stand up and applaud for every time they see it performed really well. Music or production type shows get it easier and people stand almost out of habit at the end of those, even if they’re not great. I have the fortunate advantage of magic in combination with stand up and have an interactive edge to the show that allows me to pull a standing ovation more often than a straight stand-up comic. There’s nothing terribly important about getting the standing ovation. In fact as crowds become younger and less used to seeing entertainment in a theatrical setting, the less they give encores or standing o’s no matter how much they loved the performance.  They simply don’t know what an ovation is, or that there’s etiquette to performances. That said I do enjoy getting those elusive standing ovations.  It’s an old school seal of approval for myself. It makes me feel like I’m doing my job.

Conversely, performances where I have not received the coveted standing o are often the best in the minds of the passengers who see the show.  Proof of that are the ratings and comments I hear around the ship. End of the day what I’m saying is this :
The standing O can no longer be used as a metric for the success or quality of a comedy based act, BUT, when they come around its reallynice.

I’ll leave you on this unrelated, but still important observation.

As noted I just spent 8 weeks on ships. I’m basically a passenger except the couple of hours a week I’m doing my 2 shows.  Armed with that information, I think I have a good idea of what it’s like to be a passenger. I live in the same cabins and experience the ships as they do. I have to say, food, living conditions and entertainment are of course all top notch, but it’s the little things. Details are what put HAL into the best of the best. How dry cleaning and laundry service are dealt with and returned. The cabin attendants, bar and wait staff  who are not just friendly but remember EVERYTHING about you. The easily accessible people high up who you may wish to ask questions of, including the captain.  It’s all there. The physical look of the ships and how they’re designed for relaxation.  Its remarkable.

I’ve performed on just about every cruise line out there and I remain of the opinion that Holland America Line does it up best.  If you’re like me and you’re NOT really into getting drunk and partying until all hours of the night but still want to have a fun time, be pampered and enjoy a really nice meal followed by a scotch out on the back deck, before you see some awesome ports, this is the cruise line for you. The pace of the ship is complimented by the staff onboard.  If you’ve never done it before I suggest you try out just one Holland America cruise vacation.  I highly endorse it, and guarantee you’ll be back.  If you think I’m kissing butt because HAL employs me, think again.  Here’s the proof; given the millions of airmiles I’ve accumulated flying across the globe for my career and the connections I’ve made at vacation spots throughout the world, I could send my parents anywhere on the planet for a vacation. I’m not joking… literally ANYWHERE.  I don’t though, I send my parents to Holland America. If HAL can please my pickiest of the picky mother, trust me… its good enough for you.
At the time of writing I currently have no Holland America bookings in my calendar, but I’m sure they’ll come in and when they do I’ll post about the ships and dates, in the hopes of seeing you at sea.

Until then, don’t forget to stand and applaud a fine performance…….