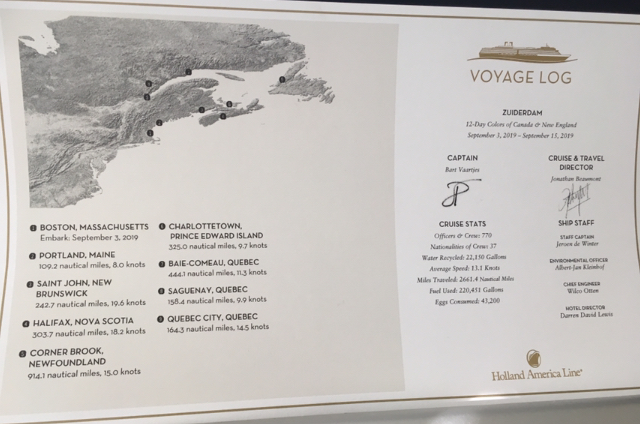 Safety Above All Else

It’s true, I’ve been absent for some time.  A month to be exact.  Once again Holland America Line was generous enough to hire me to headline shows with my Comedy Magic show in theatres on 2 of their ships over the course of 30 days, on opposite ends of the continent.
I spent the first two weeks in Alaska, as I do most summers with HAL.  Amazing. Sitka, Juneau, Ketchikan, Victoria Canada… just amazing.  It’s the cruise of wildlife and spectacle.  Never to be missed.
Then I went to the Zuiderdam and performed on what Holland America calls the “Fall Colours Cruise”.  Mostly eastern Canada, starting in Boston and sailing around to Halifax, Portland and Newfoundland, PEI, and Quebec.  The cruise is BY FAR my most favourite of any.  I freely admit I’m close to home and in Canada so there’s that…but hey…. Its truly a stunning sail. The cover image is the route we take.

Here’s the reason I write this post. During the Fall Colours cruise, Hurricane Dorian hit.  I’ve once sailed through a hurricane.  Hurricane Irene and believe me it is NOT fun. New York to Bermuda the ship was tossed around pretty badly.  It was on another cruise line not worth mentioning.  So when Dorrian came for the east coast of Canada, and it was headed for our ship I began to become concerned. For about a minute.
I can tell you from experience that captains on Holland America take the job super seriously.  I personally know Captain Bart Vaarties from performing on other ships he was the captain of.  Safety is always his paramount concern.

We left Halifax in time to miss the Dorian damage but had to skip the port of Sydney Nova Scotia and take refuge in the gulf of the St. Lawrence. Cancelling a port is disappointing to passengers and not something anyone wants, especially the captain. But here’s the thing, it didn’t matter.  The course plotted allowed for smooth sailing and relatively warm weather.  Not even rain.  You’d never know that not far off was a hurricane. The night of my performances there wasn’t even a bit of rocking on the ship, and the shows were fantastic.

The choice Captain Bart made to remove a port and opt for safety of his passengers, crew and ship was the professional choice. Years of experience allowed him to come up with a route that opted for safety AND allowed for the cruise to remain fun and enjoyable for all. That’s a pro.  That’s who you want in charge of the massive thing you’re on in the middle of the ocean.

Other entertainers often ask me why I no longer perform for other cruise lines.  I generally tell them that Holland America treats its entertainers better than any other line and I enjoy the audiences best there.  Those things are true and partially why I hope to continue to perform for them, but there’s another reason.  I’ve performed on just about every cruise line out there. I feel a certain sense of ease and comfort getting on HAL’s ships that I don’t feel with any other cruise line. I guess it’s things like how Captain Bart handled the Dorian storm that keep me at ease. Moreover I knew it would be fine.
I’m easily stressed, I’m that kind of person. I can’t tell you how nice it is to go to perform in a place where I’m comfortable and don’t worry about anything.  I know you’ll get the same feeling when you sail on Holland America, and I hope to see you at sea, in my theatre, laughing and being amazed. Don’t worry about anything else. I feel like we’re all in good hands with them.
Until next time,
Good Night and Good Luck,