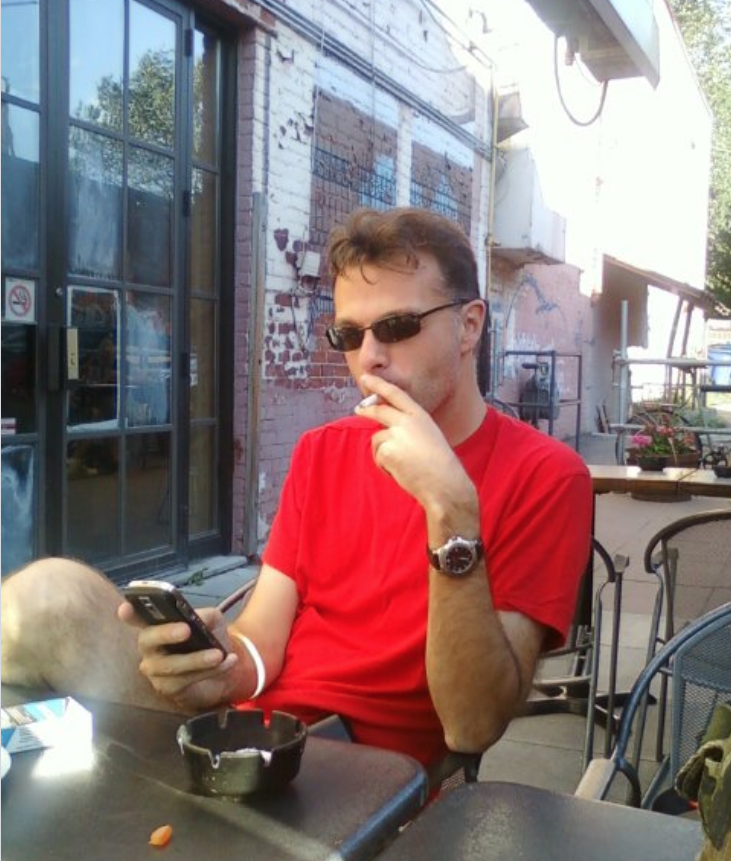 That photo of me smoking on the patio of the Rhino bar in Toronto is 10 years old today.
Famous American comedian and magician Tom Mullica told me once that quitting smoking was the hardest thing he’d ever done in his life. I believe it. Had you seen the look on his face as he described kicking it, you’d believe it too. Only a smoker knows the struggle of it. Not every smoker. Just a certain TYPE of smoker.

Better part of ten years I’ve fought kicking the addiction. The only way to quit is like they do it in Stephen King’s Cats Eye.
Still, I gain ground and it pushes back. I draw a line and it crosses it. Like Captain Picard fighting the Borg it just keeps inching through space, bringing you closer to its goal—Assimilate you with the dead. It wins because it knows it can wait. It exploits your weaknesses and affirms your self loathing. You genuinely hate yourself every single time you light one.
Every. Single. Time. You know the damage it’s doing. You know it will kill you but you light it anyway as you sink further into depression because you’re unable to resist.

Sometimes the addiction will let you have time off, knowing it’ll get you back one day. It knows it you’re coming back, it’ll wait for the right moment.
It’s the most abusive relationship on the planet. Kicked harder drugs WAY easier than this. My friends are all artists. The addiction seems to grip tightest on our community. The low self esteem introvert. The person who enjoys the appeal of the constant internal dialogue, the fight of it, the science, the ethical quandary that artists love to debate and be inside. The mechanics of quitting are appealing that way. It’s part of what makes the addiction so complex. It’s almost a drug in in itself, the cycle of quitting and starting and quitting and starting.

My ex was a social worker ( speaking of satanized afflictions who should be butted out ) queen of the harpies had clients who often could kick meth, H, coke you name it, but rarely cigarettes. That’s the level of addiction you’re railing against. Stronger than meth, but you can buy it legally.
I have profound respect for everyone who’s quit. I genuinely look upon them with a bit of hero worship. I’m down to a few sticks day. If I’m drinking, more. Booze is a trigger. So is being on the road. Empty hotel rooms, airport baggage claim areas, the walk back from the restaurant. You’re alone ALL the time. Weeks on end. That’s where smoking lives. That’s when it comes for you. It wants you back. It’ll do what it has to in order to win. It will even go so low as to remind you of all the times you failed in your life and why not fail at this too…. it won’t judge. It understands. It just wants you back. It reminds you that this at least is consistency. Order where everything else is chaos.
All that is to say 3 things.

1) smoking is so awful and ugly an addiction it makes me hate all form of government and authority for not banning it ( they never will; too much tax money ) but government and its health organizations are hypocrites. They used to throw people with a joint in jail while they let this pass because of money. Disgusting swine. They’ve outlawed far less harmful drugs than this.
2) in this photo I’m smoking and wearing a red shirt. Appropriate. Who dies first on the Star Trek away team ?
3) maybe it’s not all this. Maybe I’m just a weak slack dog mofo that can’t get the job done.

So what does all this have to do with comedy and magic and me being a professional comedian and magician for the last twenty something years? Well, I think its a metaphor in a way. Never give up. I mean, that’s show business…. sometimes it feels great and others not, and you know its a mess and that travel isn’t doing you any favours….still, you keep going onward. Gotta stick to it. Quitting smoking, working in show business….whatever you do, just keep at it.
Meh, whatcha gonna do?
Good night and good luck,
Jane Doe