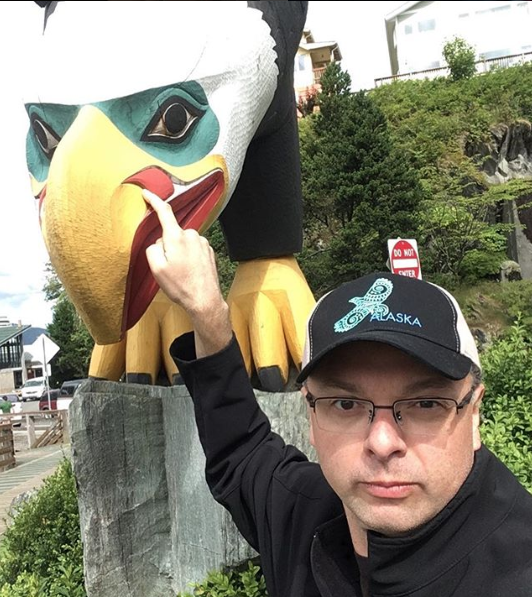 Well, that was quite a long and enjoyable run over the summer in Alaska. It is my sincerest hope that Holland America line continues to use me as part of their headline entertainment lineup. I really do have a fantastic time with them, if you were a passenger, you’d have the same experience. I’ve never met or even spoken to the booker of entertainment for HAL, so I hope my agent conveys my gratitude. Their theatres are a real treat to work.

I spent 6 weeks on Holland America’s Amsterdam and Zaandam ships. Performing first on one and then the two week cruises, I’ve decided I enjoy the 2 week itinerary best. On the second week we visit Homer, Kodiak and Anchorage Alaska. I’m fond of those places for their remoteness. I’m not a fan of fishing or hunting but there’s SO much to see up there simply visiting and walking around is enough. This cruise is on par with the New England run, another cruise you MUST take in your lifetime. More on that later….

Holland America really does it up right, and if you’ve any interest in Alaska you NEED to take their cruises. That’s the company that’s really mastered Alaska, and trust me, I’ve performed on every cruise line that goes there. Holland America is the only cruise line I send my parents on, so that says something. HAL are experts at everything from getting you close to Glaciers, exposing you to interesting tours, they bring in Wildlife and nature specialists to give free talks and ( cough, cough..toot my own horn) they have the best entertainment of all the cruise lines. Yea, I AM referring to me. So be it 😉

That brings me to an interesting experience I had while performing on the Zaandam.

Someone who saw my show was kind enough to write me a lengthy email, he enjoyed my performance and wanted to talk. He seemed decent and ultra nerdy, like myself he’s into Starblazers, Thunder Cats, Transformers and other 80’s cartoons. It comes out in my act I’m one of these people. It resonated with him.
This guy is a game designer. He worked on Myst and Riven ( my 2nd and 3rd favourite games, behind only American McGee’s ALICE.) He’s my kind of nerd. Still, he’s a magic fan, making me weary. Should I reply? Sometimes one is afraid to encourage the magic nerd. They can be over the top quite often. I decide to reply to him anyway… the nerd factor won out. WOW I’m glad I did.
In his response to my response it came out he has brain cancer. His wife and kids and he are on this last vacation. They got on the Zaandam to fufil his wife’s dream of going to Alaska. For his part, he’d dreamed of being a magician, and like myself grew up watching the David Copperfield TV specials, something else I talk about briefly in my show. He wanted to know what it was like watching those shows and actually becoming a magician, instead of the path he took. There were other questions. I enjoyed the email conversation.

Cancer is a giant piece of shit that I hate with all my being.

Point is this, if you’re a comedy magician like me, or any type of act and someone writes to you, always be good enough to reply. You never know what awesomeness awaits, and you never know if it might make someone happy that you did, and that’s what we’re on the planet for right?
When I was a kid Richard Dean Anderson wrote back to me. By hand. MACGYVER wrote back to me ! Blew my mind. I’m no Macgyver or any kind of celebrity but the impact of his reply was never lost on me. So yes ! always reply to letters and emails. Could make someone’s day. Could also mean you’re just a good human.

Until next time,
Good Night and Good luck,