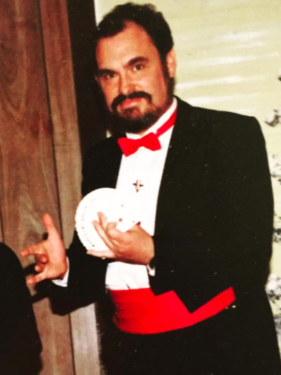 The general public could maybe name 3 living magicians, 4 if you include Harry Houdini. The average person may know David Copperfield, David Blaine, and if they were paying attention, Chris Angel. Its a sad state of affairs that Doug Henning has already vanished from popular consciousness, given what he’s done for magic and how he’s moved it forward.

That said there’s thousands, maybe tens of thousands of magicians who for good or ill languish in obscurity. The acts on the ground who perform in schools, birthday parties, nightclubs, malls and the like. Even higher end acts such as myself that perform on cruise ships, theatres, large corporate events and on television aren’t “known” to the public in any real way.  The workers. They grind out a living, largely unknown. Its a shame they never get much credit because these are the magicians responsible for turning young 8 year old children into magic junkies.  The magicians who are first seen by a young David Copperfield or Chris Angel and make them say “I want to be like that”, and go on to change the magic world forever.

My old friend Dennis Rosso was one of those “workers”. Tragically I’m not sure anyone would remember him or his act now.  To my knowledge no video footage exists of him performing.  When the magic shop in Toronto closed permanently I took the only remaining promotional photo of Dennis from the wall for my own private collection and I doubt there are others around. I can promise you this: he was a worker in the truest sense.  Dennis loved magic in a way few magicians do. He loved it all, close up, stage, mentalism, grand illusion, you name it. He also had an affection for dove magic and he was one of its better practitioners. He was a good, well rounded magician and a sweet, kind and lovely human. Dennis performed at birthday parties, libraries and the occasional corporate event. I recall him getting a booking in the mid 90’s to do his dove act at a modelling show in Niagara Falls.  Beautiful women walked onstage to show the latest fast fashions and there was Dennis centre stage producing doves surrounded by stunningly attractive ladies.  What a gig.

He never stopped performing though.  I know it would kill me to have to work a day job and I’m sure it stung Dennis a bit, for a time he worked for the TTC. He enjoyed the freedom magic afforded him to be able to spend time with his kids during the day.  That’s the kind of guy he was.

Dennis was a fine magician. I’d met him at Morrissey Magic shop in Toronto, a relationship brokered by Herb Morrissey, owner of the shop.  Herb knew that both Dennis and I lived in Brampton and at 16 I needed guidance with my magic.  Herb knew Dennis was the perfect person to help. Not a mentor per se, but someone to put me on that path and make sure the foundations were there. I very much enjoyed spending time with him. I’d often visit Dennis at his house where he’d show off his impressive collection of magic.  His basement was chalk full of magic effects, old and new.  Walking down the stairs if you looked to the right, was the magic. A plastic sheet covered each book case and each prop.  To the uninitiated you’d think it was just old luggage, but if you knew what it was, it were as if someone had their very own magic shop in their basement. Everything was meticulously kept in order.  Every prop, even the ones he worked with regularly, were kept in immaculate condition and catalogued. Each magic effect had its own box or bag and each had its place on the shelf.  The doves were looked after like members of the household.  Dennis also had 2 sons, neither were kept under plastic, but one showed promise with magic.  They both did. However one in particular, Andy, seemed to have the knack. Dennis had taught him the dancing cane and it was apparent to anyone who heard him speak about it, that his sons skills with that dancing cane had exceeded his own and he was very proud of that.

In high school Dennis helped me with my routines and occasionally loaned me props to use in school shows. I borrowed his Lester Lake style guillotine for a coffee house performance, amazingly people from school still talk about that now, 25  + years later.

That’s the kind of people that you need to hang around starting in magic, or any art.  The older person who can guide you along the way.  Without Dennis’ advice there’s no way I’d be working the cruise ships and casino’s in Europe and North America that I do now. I recently headlined at the Magic Castle in Hollywood, California, a career dream. One of his sons brought to my attention that Dennis regarded the Magic Castle as the gold standard of magic performance.  Many people do. If you work there, you’re considered the best of the best. I wish I could tell him I headlined there. He’d have loved to know that I made it that far.  I believe he’d also have been proud of my work on Penn and Teller’s TV show Fool US.  Alas, Dennis was taken from us far too soon. Cancer, the type of which I’m unable to recall, took him away. That was in the 90’s. It always upset me that he could have done more with his magic career, but never got the break he so richly deserved. He had the skill and passion to take it to the next level. That first jump up is a hard one, out of the local scene. Its a huge risk.  As a father now I can see that taking that career risk when you have 2 kids is a massive decision. I always respected that Dennis didn’t want to gamble with his family’s well being at the cost of serving his own desires.  That’s an impressive, selfless thing. That said, I’m reminded of an interview with Bono from the band U2.  Bono was asked what makes U2 one of the worlds best groups. Wisely, Bono replied “we have a recording contract. Thousands of garage bands are WAY better than U2, we’re just lucky enough to have that contract”.  That was Dennis. He never got the recording contract.

Not long after his death, his wife Irene asked me to the house and offered me the chance to take something that belonged to Dennis as a keepsake or memento. I ended up taking two things.  A red change bag I’ve never used but love the look of, and a black silk collapsable top hat. They were crazy expensive.  500 dollars even in the early 90‘s. Hand made in Japan with beautiful silk. That hat. I’ve used that top hat every show since it was given to me.  Every. Single. Show.  Easily over 5000 shows by this point. Each night I’m backstage at whatever venue I’m performing at I set up my props for the show I’ll do later that evening.  The last thing to come out of my case is that black collapsable top hat. I remove it from its case, hit the brim with the tip of my finger to make it pop open and I hear the familiar snap of it expanding. I always think of Dennis right then. Top hats are classy and timeless, sort of like him.