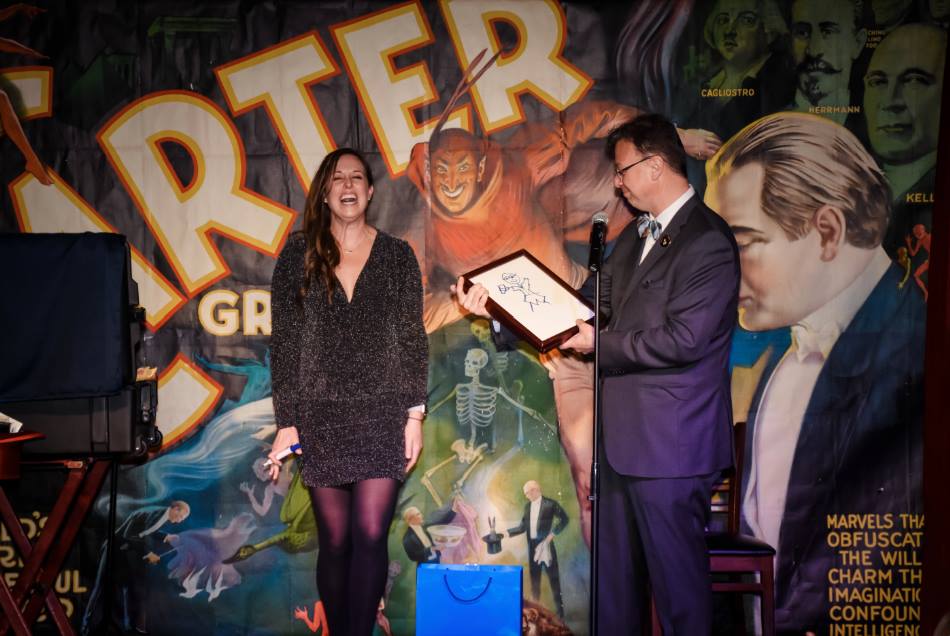 I just finished performing a week at the fabulous House of Cards in Nashville, TN. USA. As you can see by the photo, making an audience member laugh is the best thing a performer can do, the second best to have to have Carter the Great smell you’re armpit. Its a long story.
There were 28 shows in a week of packed theatres. It was amazing. It would have been listed on my Matthew DiSero website

I’d never performed in Nashville before, but I promise I’ll go back.  The food was amazing at every place I went to.  Stand out establishments were Marvins BBQ, Jack’s BBQ, Bakersfield ( if you want the best taco’s ever ) and Hattie B’s, a chain fried chicken place.  I’m not usually keen on fried chicken but WOW… was this ever something. So to answer your question, you bet…. I gained probably 8 pounds that week.

End of the day I wanted to say this, as an establishment the House of Cards really is a must see if you’re in Nashville.  It’s sort of like the Magic Castle of the south. 4 Shows nightly, close up magicians at the bar and stations around the restaurant and patio.  Magic ephemera everywhere, and a piano that plays on its own and answers questions. The food there is out of the world too.  Staff are great too.  The bar tenders are walking encyclopedia of mixology and the operations and entertainment manager Joey Martinez ( who used to run the magic castle in Hollywood ) keeps that place running tip top.  Its an experience you really shouldn’t miss. The addition of celebrities over flowing in that place is also pretty cool. Jack White from the White Stripes came in, the man who owns Gear Box entertainment ( the largest video game company in the world I’m pretty sure ) and one of Elvis’s old piano players …. its trippy.

Now that I’m back from Nashville,  I’m home for 3 weeks before I leave for an epic run of TWO MONTHS on Holland America’s amazing ships. Two months of fantastical shows. HAL is another company that just gets it right every time all the time.  The theatre shows are amazing, standing ovation type houses, but that’s the least of it.  The food and cabins and staff are just so top flight its hard not to be blown away by the majesty of it all. I start my run on Holland America Line’s brand new ship, the Nieuw Statendam.  I’ve seen photo’s of the stage and the house.  WOW, its easily one of the nicest stages I’ll have worked in my 20 + year career.  I can’t wait.

Things are going well here until I leave. I have my son’s new bed installed and the Real Ghostbusters cartoon sheets on it. They were my bedsheets from the early 80’s. It’s pretty epic. I’m going to enjoy the time I’m home with my family before I leave for 2 months. Showbusiness is ebb and flow and when the work comes in and you have to be away, it just makes being home that much better. Always make hay while the sun shines.

Hope to see you on the water on one of Holland America’s ships.  I’ll be out from Feb 24 – April 14.  I’d love to see you.  Email me or Holland America and one of us can tell you where I’m performing and when, and how to book your travel.