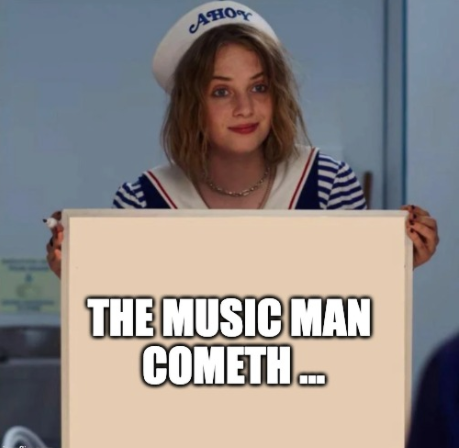 The month we hunted the music :

Four weekends straight a neighbour and I have been hearing music.  It starts around 11pm and goes until 2:30am. Sometimes audibly close and others farther away.  Ebbs and flows like the tides, never in the same place.

The first weekend in my yard we hear the music and decided we should investigate the sound.  Our initial plan was to take beers, walk until we found the party, then invite ourselves to it. That’s what predrunk 45 year old dads do late at night when its the suburbs. Congratulate me later on the profound boringness of my life.

I live on a cul de sac. At top we noticed the music wasn’t originating from our court or even the next court over. It’s coming from across the street now. We wander in that direction. Beers will not drink themselves and we needed a party to attend. Perhaps we’d find some younger, childless humans to remind us of the way it once was.
Across the street exactly at the house the music was coming from. POOF!  The music moved again, now coming from the ravine behind our houses. It was right there in front of us then it moved. We followed the sound to the trees. Clear as day it was in the bushes next to the river. It moves again. I’ve performed on enough stages to understand how sound travels in weird ways, but this is crazy.

Teens we thought, drinking.  Must be running around with the music on bluetooth speakers hidden everywhere. Perhaps another  45 year old man in flip flops with a ghetto blaster trying to relive his youth. Maybe a drone, or some sick bastard had strapped a speaker to an animal and it was running though the ravine and the courts. Like the dude with the huge hair on Ancient Aliens, we had theories. Either way, we have to find this person and see who it is.

WHATS PAST IS PROLOGUE :

We chased that music for 2 and a half hours. It would vanish and reappear. Go loud and quiet. Location to location moving at a break neck speed. So close you’d think it was at the next house or the other side of a playground then it vanishes.  The ravine is not connected to the cul de sacs and each court has no access to each other. No catwalk or path to get from one circle to the other. How the hell could this be? Music man must be military. Who else could be so stealthy?.  Almost on top of the music Shazam! it vanishes.  This prick had to own night vision goggles because as we approach the music moves.

He must be seeing us, taunting us with the slick rap of  Vanilla Ice and Snow. “Licky Boom Boom Down.. informa”… then it fades and reappears elsewhere with Mc Ren.

We hid behind electrical boxes on the boulevard as we approach. “ ICE ..ICE …BABY”…, then crawl into the darkness of shade created from the street lights under trees. We hugged peoples privacy fence lines. Two grown 45 year old men at 2:30am crawling around the streets tracking music with beer cans carried in a shopping bag.  Whatever, we’re on a budget. If anyone had security cameras on their houses they must have thought we were the worst criminals of all time. “Dad bod” G.I. Joe will not lose to music man. Its the type of fun that only the suburbs has to offer presupposing you’re sufficiently drunk and bored.

Just past the two a.m. hour BOOM, the music stops.  The last song he played was Semi Sonic’s “Closing time, “….one last call for alcohol so finish your whiskey or beer”….. then that was it.  Music gone. Music man gave up. We hoped he’d be back the next night. He was indeed taunting us.

NIGHT 2 – pre-drink the music.
We hunted it again to no avail. The following weekend arrived, music came and we hunted and once more lost. Rock, country, rap, all over the musical landscape but you couldn’t pinpoint its location.  Pissed off with the slowness of walking and not being able to catch this thing with our out of shape drunken walking, at 1am we jumped on our wives bikes. Its hard to bike with a buzz, but not impossible. Darting up and down the cul de sacs tracing the music.  Like the velacioraptors of Jurassic Park you couldn’t peg down the exact location of this thing. WOW it was fast. SO fast.  Even on bikes, you couldn’t pace the music.
At one point we had it trapped inside an underpass. On the road, the music was clearly coming from the foot tunnel underneath. Peddling hard, I went left, neighbour went right.  We trapped the thing. No way for it to escape. I make the turn at the mouth of the tunnel, the music disappeared. I went through and neighbour was nowhere to be seen.  He’d vanished like a fart in the wind, taking the music with him.
Neighbour heard the music move from the end of the tunnel and chased it through the ravine path to the woods. Then beyond the lake and to the plaza near the liquor store, bar and McDonalds. I had no idea where he went and thought he’d been abducted by aliens. Communications failed us.

Solutions:
I’m a bit of a ham radio nerd, well nerd in general. The following weekend, we were on the coms. Able to split up, but still talk if someone called the cops on us as suspected prowlers and to track our foe, we were ready. It’s UHF radio time, this prick will not best us. Armed with ladies bicycles, beer in the pockets of our cargo shorts and long range walkie talkies with ear pieces for hands free talk, we looked like drunken mall security guards. No matter, tonight Paul Blart gets his man.

Down the dark wooded path the radio goes off in my ear.  “Its ten feet in front of me” the neighbour says.  Impossible I reply,. Its 10 feet in front of me. We were 3/4 of a kilometre apart from each other. We meet and realize the music came and went and followed us. It was in two places at once.

Two nights ago in my neighbours yard, having beers over the wood splitter, plotting under the gazebo a tactical solution to the music man problem, we hear it.  Loud, as if someone had a party in the court and invited Micheal Jackson to perform live….We’re gonna be starting’ somethin. We ran…. but it moved. We dart to my garage for communications and ear pieces, ladies bikes, and restock the booze pockets.

Walkie check. This is for real. Sound? GO….biking with sandals on – GO, beer in pocket- GO, Balance check – maybe. We aren’t stopping until we find this douche.  We just want to SEE the person.  We need to know if its Rasta Ray from my teens selling weed at the creek or some depressed stock broker out of work, or just kids.
Zig Zagging streets, ravine and obstacles as we had in previous weeks hiding in shadows and behind cars and crawling through 10 miles of shit pipe at Shawshank, we search. We only stop to have a sip of beer or pee on some poor bastards fence along the way. In the suburbs no one can hear you scream, or mark your territory. One of us waits in the shadow, the other passes him hoping to head fake music man into thinking there’s only one of us. As music fades, I walk back towards home knowing the music would follow. It does and I go past the neighbour in the shadows. Surely this will expose melody man. Alas, it vanishes again. No dice.
Once we almost had him cornered, but one of us lit a smoke and tipped our location.  We need to rewatch Surving The Game. Only Ice-T can help us.