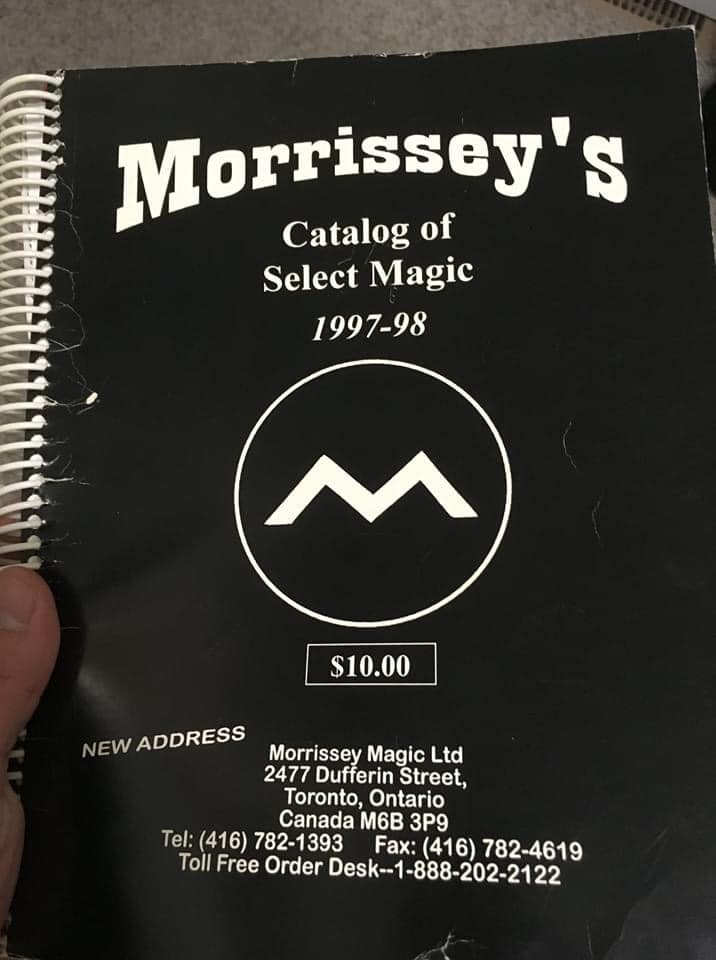 The owner of Morrissey magic, Herb Morrissey died Aug 14 2003. The same day as the Toronto blackout. I bet his death caused it. He had that kind of force of spirit. I try to post about him on the anniversary of his passing.

The kind of person who without trying, was able to create atmosphere in the shop that made you want to be a magician. To be IN show business. To work and learn the trade. I’ve visited magic shops across the globe, not all of them have that ambiance, the je ne sais quoi, that demands you return.

The Real Magic of the shop

As a kid the first thing Herb sold me was Wunderbar by Steve Dusheck. Levelled me. There was no turning back after that. There was no other job. Showbiz sunk its invisible thread into me from there in ( see what I did there?) and everything else was pushed aside. Time in school felt like I was holding my breath until I walked into the store on a Saturday. Upon entry there was an exhale like you’d arrived home or at very least to the island of misfit toys.

You couldn’t miss the piece of duct work painted like a magic wand with a sign hanging from it that read “ Jumbo Wand $250”. I liked his sense of humour. Home again.

Herb smoked and drank and could be cantankerous at times, one foot up on the stool bitching about how he wouldn’t demo low profit items, but he did run a killer shop. Hell of a magician, and a fine teacher who helped put me on the path to a career that’s taken me around the planet. That’s a special thing.

Looking at the promotional photos on his wall of magicians past and present I’d imagine what an exciting and wild ride a full time career in magic would be. The whole shop made you desire it like a drug. That career was so much more than I’d ever dreamed it could be. “Even when it’s shit it’s better than a day job”, Herb wasn’t wrong. As Hunter Thompson might say, I bought the ticket and took the ride. True, but Herb was one of the many people enroute helping me purchase that ticket. I can’t thank him enough for the gift of possibilities that came inside this book every year. Thank you so much man. It’s pretty shit right now, has been since March, but yea, it’s still better than a day job. RIP kid, you were one of the good ones