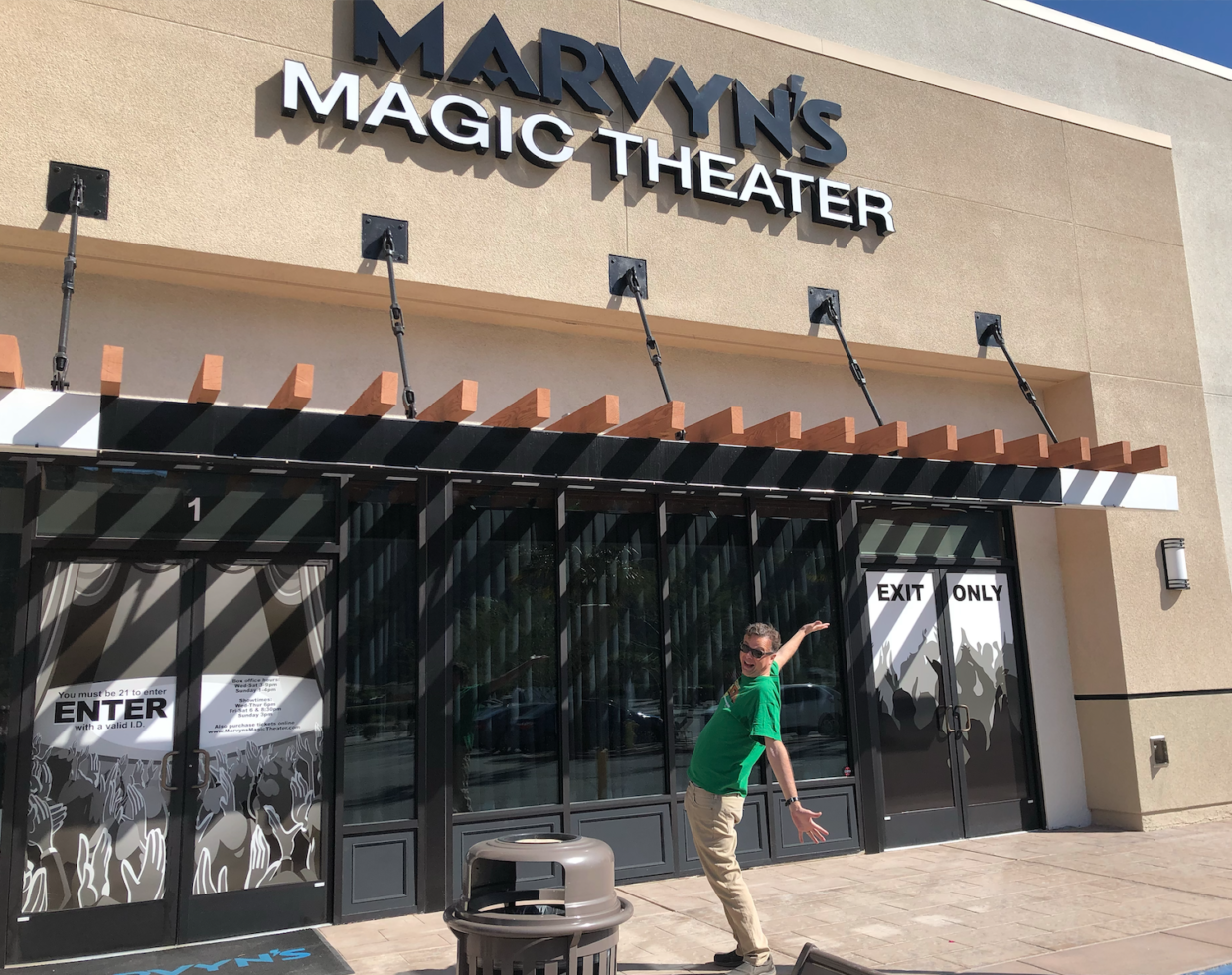 New magic venues are popping up across the country. For the longest time the only place you could witness live and with regularity the performance of world class magicians was the Magic Castle in Hollywood California. That has seriously changed.

Like comedy clubs in the 80’s, magic theatres big and small are appearing ( excuse the pun ) in every major city. The House of Cards in Nashville, and the Chicago Magic lounge are newer establishments, but there’s dozens around.  Magic Island in Houston and a host of others dot the landscape of the United States and Canada. Its a wonderful time for magic and its patrons.

I just returned from performing at a venue in Palm Springs called “Marvyns Magic Theatre”.  Its operated by Jeff Hobson, comedian and magician of some note.  He’s been pretty visible in the last few years emceeing the Illusionsts show touring the world. Jeff is ridiculously funny and a consummate professional. He’s also been a working pro for a very long time, so watching him is just a treat. Working with and for him was also wonderful. When the producer who hires you is also a magician, they know exactly what you want and need before you even ask. Marvyns itself is a world class magic venue and everything about it is first class. The venue is named after a local resident and famous magician, Marvin Roy.  If you don’t know Maryvn’s name you may recognize him by his stage name, Mr. Electric. He was Liberace’s opening act for years. Marvyn and his wife Carrol toured the globe with his unique act.  Themed around light and electricity they performed for decades in revue shows, Las Vegas and even on Ed Sullivan, Merv Griffin and the Tonight Show with Johnny Carson.  Here’s a video of them, its worth watching :

I was lucky enough to share the stage last week with The Evasons, Mentalist Duo.  Friends, one the worlds top mentalists and easily the best second sight act anyone has ever seen.  I’ve shared the stage with them many times at magic venues and corporate functions and always enjoy their brilliant performances.  An act like that is the product of incredibly hard work and dedication to the craft that so few acts have these days.
Here’s a clip that describes what they do and how people react :

I love magic and always have since I was in my early teens. To say that I’ve been lucky to perform along side some of the best magicians in the world at these venues would be an understatement. I honestly believe its luck. To be sure, I have to be able to deliver an act good enough to work places like The Magic Castle, The House of Cards and Marvyns, and it seems I own that.  However, I think a good portion of actually booking the work comes down to luck and friends.  Just the way it rolls. If you’d told 14 year old me that one day I’d be performing at these places I’d have laughed out loud at you.  I’m so very lucky.
What I really wanted to say though is this.  While its another golden era for magic and magicians, its not to be taken lightly by us magicians and entertainers. I’m happy there remains show rooms dedicated to magic and who retain a high bar for booking magical artists. Venues who care how magic is seen by the general public. Not every magician gets to work at these places and that’s ok. For newer talent its good to have a high water mark to strive for and places you desperately want to work.  Magic needs that push. The public needs to have outlets to see the best in the craft, its how we’ll keep moving forward.  I hope everyone supports these awesome magical stages and purchases a ticket to see the product of clever minds on the platform there to amaze, confuse, befuddle, bewilder and bemuse.  If we’re lucky they’ll all last a long long while.

Until we see each other from the stage,
Good Night and Good Luck,