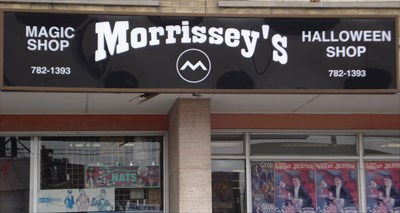 14 years ago yesterday Herb Morrissey of Morrissey Magic in Toronto, passed away. I think he also cause the big Toronto blackout

I miss him and the laughs at the shop and the advice along the way. The other day I put my foot up on a stool and lit a cigarette. Ha, I thought of Herb. Either you get that or you don’t. Cans of coke, chinese food from across the street and an unusual number of ashtrays on the counter.  That’s the magic shop of my youth. Good times.
Herb and that magic shop were great to be around. 80’s. Saturdays. Watching Herb demo Bob Farmer’s latest thing, or refusing to demo something because the mark up wasn’t there. All the working acts hung out and talked shop. The best place to learn. Just timeless. I wonder what will happen to magic if the brick and mortar shops vanish. Not good things I think.

I think you need a brick and mortar magic shop to hang out in, a place where someone can teach you things, where relationships are brokered, and bits of your act are honed. Herb was the best for that.  Often told me that a certain piece of material I was working on was complete garbage, but managed to point me towards something that would work better. It almost always was good advice, and some of it material I still do in my act today. In some regards the magic shop does a better job of putting people on the path than a local magic club does.

We were lucky with Herb, he was a working act before he owned the shop.  A manip act who played all the playboy gentlemen’s clubs around Montreal and for a while, across the country.  He and a ventriloquist friend named Gene Sneed who also hung out at the shop, worked for decades and were at the top of their game. When advice came from either one of those guys it was a good idea to listen.

I think I was lucky to have started in magic very young, and at the right time in the 80’s. I was super lucky to live in Toronto where at the time 2 full time magic shops operated, at one point there was 3. It was also a hotbed for magic too.  Several famous magicians not only lived here but hung out at the shop.  To have access to them, Herb, and the elbow knowledge that came along with that was priceless.  I’m not sure the internet will ever be able to compete with that. We’ll have to see where the future of magic lay, but I’m certain the day of the brick and mortar magic shop is coming to a close.  That’s a shame.  Acts won’t have the same foundations to build on.

I can imagine Herb, hating the internet and everything it stood for, sitting at the shop wondering how the hell society got to the point where no one read a magic book, magic was done on video for a non existent audience, and no one set their sights on being a full time act anymore.  Strange Days.

Also : Magic Wand for sale $250 ( I wonder how many laymen tried to buy that exhaust pipe on the ceiling at the shop? )