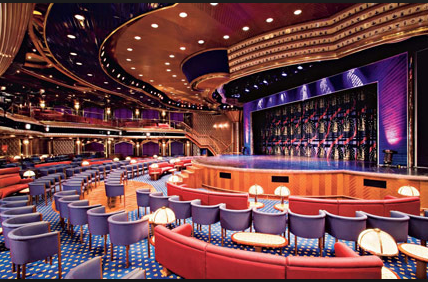 I cover the Waterfront

Perhaps it was the days at sea without land or perhaps it was the fantastic mood I was in from absolutely killing it for my performances on Holland America’s ship the MS Amsterdam, or maybe It was that I had good fortune to work with highly creative acts, but whatever the reason, it was one of the most productive weeks in recent times.

I joined the ship in Guatemala, and sailed up to Mexico and on to San Francisco, where I went home. of the 7 days I had 4 at sea. So that’s four solid days to work on my act.  I promise you, work I did.

I’ve added a new piece to my show.  An obscure bit of magic from the past that’s largely been forgotten, I’ve updated it to perform for the modern audiences I work for on Holland America. What made this week so great is aside from coming up with new lines and ways for the audience to have more fun watching the piece, I did something else. As you might imagine, there’s a secret to a magic trick.  I’m not Gandalf, it’s all fake. I bring the fun not spells. Those secrets to the tricks we magicians do sometimes work mechanically, or sometimes work on a psychological ruse and sometimes it’s pure skill of the hand. In any of those cases the method to a trick has to have the fat cut from it.  The method is distilled over the years down to the least amount of work for the performer to accomplish the effect in the most natural way. Like editing something you’ve written, something I should do more.

I’m proud to say that in the case of this trick, Picto Transpo, I’ve shaved about 50 years off the work of distilling the method down to something easier to use. The effect as I did it originally, was that on a white picture frame I made a drawing of the person who kindly came on stage to assist me.  A thank you of sorts for being generous enough to spend her time and talents with me on stage. Once I’ve drawn her picture I offer her the chance to draw a picture of me on another picture frame. Fair is fair after all. Hilarity always ensues as they draw pictures of me with crazy hair, and hands and feet etc… the audience loves it. In the end the picture in her frame magically changes places with mine. It’s a cool trick and departing from the original method I’ve eliminated the envelopes, kept a frame in full view the entire time and cleaned up the blocking.  It’s a vastly superior effect now than it was. I’m very proud of this. Its great when I have a piece in my show the audience loves and on the back end of the workings of the magic, which no audience ever sees, I make the whole thing better.  Swish, all net. My greatest concern is that the audience ALWAYS have a good time and how do I create something they’ll love, but…. If I can sneak in a killer method, I love that too 😉

In the end I guess I’m saying that while I may not be a great creator of magic effects from scratch, over the years I’ve discovered I’m pretty good at cleaning up existing effects and making them better.  Especially for audiences today.  Nothing in the world could be less important I suppose, but I always read that you should leave magic in a better state than when you came to it.  In other words, move the bar forward for others to follow. This week, thanks to the wonderful booking on Holland America’s Amsterdam, I moved that bar across the field.

It’s hard to describe how much I enjoy performing on that cruise line. The luxury, the class, the people ( once again, THE FOOD ) I just love it all. The ships are filled with wonderful pieces of art and when you look at them remind you all at once, you’re not alone in the world and great things happened before you and could be happening to you right now.  It sure did for me.

I’ll be performing on the Amsterdam and Zaandam over the summer in Alaska, so…. I hope I’ll see you on the Sea.  Please come and try out HAL ships, it’s a whole different experience. You’ll love it. I’ll buy you some crab up in Skagway….