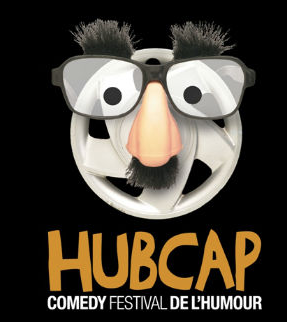 Moncton’s Hubcap Comedy Festival de l’humour HubCap just celebrated its 20 year anniversary. Here’s a story worth reading, its important for all comics to remember:
I’m performing that year and thrilled to be. Irwin Barker is alive and working it, Kenny Robinson, Mike Bullard, Evan Carter I forget the full list but all ballers in Canadian stand up. As I saw it, that’s a week of free stand up university, learn from the best. I’m sure I’m the weakest act of the crew, as one does.

Halfway through the fest I get the call. My old man is in the hospital. Heart problem. He owned a mechanics garage in north Toronto, lots of comics took their car to him, so acts knew who he was. Its bad news. What to do? Understand and know,… variety comedians, especially comedy magic acts like me, rarely get the break to work legitimate comedy festivals. Its a big deal. If I go home do I fuck it up for me and worse for other variety acts down the line?. Crazy as it seems I care more about that than ANYTHING else. Don’t want to be the variety act that left a bad taste in a festival bookers mouth and no other variety act gets in. I want to create opportunity for others, not demolish it.

I ask Bullard what to do. Mike has a particular code about these things and I know what he’s going to say anyway, likely why I went to him. Lights a smoke :Family first, screw the festival, chips will fall where they may but you gotta get back to the old man. Of course he’s right.
I make the uncomfortable call to Robert Gallant and tell him I have to split, dad is in the hospital, sorry to leave him hanging one comic less half way through what is the busiest week of his year, and I’m fucking up the works of show schedules, but I gotta go. I tell him I’ll pay for my flight back, not to worry about paying me for the festival, and we’ll call it a wash. I’m trying to lessen the blow of anger to come.

With an act of generosity rarely seen by producers, he tells me not even to worry about the festival shows, buys me the next flight out, asks the festival driver to be at my hotel for 4am ( after a full night of driving comics to venues ) and get me to the airport, pays me out in FULL and consistently follows up once I’m home to make sure my old man is good to go. Generosity I’m unlikely to forget. Thank you.Truly.
Point is this, Mike is right work means nothing end of the day. Family goes ahead of that. Everything else works out. The comedy business is hard and acts think everything turns on a gig and often miss family stuff. Never do that.

I’m pleased to report the old man is still kicking, nearly 12 years later. A few heart operations into it, meds, a beaten cancer & other health issues, but nothing will keep him off the golf course. The reaper is afraid of him throwing a wrench at his head, so dad will be fine.

Until the next festival,
Good Night and Good Luck,