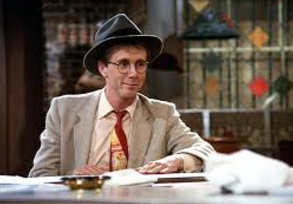 We lost Harry Anderson Yesterday.  He died at his home, not much more is known at this time. A Harry Anderson selfie is not what I want to share right now. But this is.

First time I met Harry I was quite young and I found myself sitting across the table from him at a small patio bar. How odd I thought, that the only thing separating me from the guy who’d been on my television so often was an ash tray, and a couple of packs of cigarettes and some drinks. It didn’t seem possible. His influence on comedy magicians was profound. I can’t think of a time I wasn’t aware of his presence in magic. TV star aside, there’s not a comedy magic act working today that doesn’t have a bit of Harry Anderson on them. It’s just not possible to ignore him as you develop your own style. He was that important. Yet, here he was having drinks across the table from me. It was a lot to take in. He had killer stories and along the way some really great insights about performing.

It would have been easy for him to take the celebrity route and just obsess about that kind of stuff, inflating his own ego as I’ve witnessed many celebrities do. Not to say that he didn’t ever do that, he surely had an ego but on any occasion I’ve met Harry that was not the case. Mostly it seemed he was genuinely interested in talking magic.
I always respected that he considered himself a Magician first and comedian, actor, musician, writer etc second. If you ever saw him perform live you’d see he was a different kind of magic act. His magic squares routine, in my opinion, is the best ever conceived. He was a creator, lecturer, writer and performer of magic.

My Facebook feed was filled with magician and comic friends posting selfies with him and saying wonderful things about Harry Anderson. I think that’s fantastic and well deserved and made me happy. But I wanted to let my non magician friends know that aside from being the tv star who came into your home everyday after school on reruns, or in the evening for new episodes of night court, Saturday Night Live, Cheers, Dave’s World or whatever Disney movie he was in, what he really seemed to care about was being a magician.
I’m well aware of all the other stories about him but I choose this day to focus on the fact that here was a guy who could have played up being a tv star or done whatever he wanted but kept on being the thing that as children captivated our imagination and first dragged us into show business, the thing he really loved and never stopped being.
A magician.

RIP Harry. 65, I don’t even think the SAG pension kicked in. Damn.