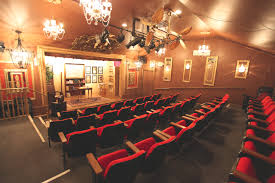 As if performing at the Magic Castle last month weren’t enough, I was just asked to perform at another historic and popular magic destination on the other side of America, in Maryland. I’d heard of it for years and had secretly wanted to work there for some time. Its owned by Rich and Sue Bloch. Rich a fantastic magician, creator, and owner of Collectors Workshop, a magic supply company. His wife Sue is fantastic, brilliant, funny and a professor of constitutional law. They’re a good match. Collectors Workshop puts out some of the coolest most original magic for working magicians anyone has ever seen. I’ve grown up looking at and occasionally buying some of their materials. I can’t wait to see more of them in person.

The venue is question is called The Dickens Parlour Theatre Just outside of Baltimore. Magicians from across America and beyond come to perform there.  They also fight over the chance to do so. Think of it as a scaled down version of the magic castle. Its an intimate dinner theatre that’s perfect for the type of performance I specialize in. Its a real honour to be asked to perform there. The quality of acts who’ve performed at Dickens is really pretty staggering. It speaks to the quality of the venue and its hosts.

I met Rich and Sue while I was performing at the Magic Castle in June. I was invited to a lunch Rich was hosting and got to meet he and Sue then.  Over lunch it was suggested that I send my materials for consideration to work his theatre. I got an email just this morning from Rich letting me know he’d seen my work on Penn and Teller Fool Us and would like to speak to me to nail down a date to perform. That was a good way to wake up in the morning.

I’m certainly no star in magic or comedy, I’ve tried to fly under the radar a fair bit…..but every once in a while something cool kicks up and show business breaks for me. In a 12 month period I’ll have done Penn and Teller Fool US on international TV , The Magic Castle in Hollywood, and now the Dickens Parlour theatre. Those performances are the icing on top of a cake that includes a year full of corporate after dinner performances at various conferences and conventions, going back to occasionally performing on cruise ships, plus appearances on a few other Canadian TV and Radio shows.

For all the financial, emotional and travel ups and downs that a career in showbiz offers, times like this make it worth it.  I could have been a scientist.  Seriously, I was going to work in physics.  While that might have held its own share of cool interesting stories, I just think there’s nothing quite like show business. When you’re working places like this, its chalk full of connections to magic and its past. Magic’s history is a rich and colourful one.  Who wouldn’t want to be a part of that?

To be honest, I never thought I was good enough to work some of these high profile venues.  So many better acts than I had come through and I figured I might as well not even try. I’m the act from Toronto Canada that Americans aren’t going to be interested in.  End of the day, it turns out I AM good enough. I only thought I wasn’t.  Typical entertainer self loathing I guess. It also turns out the old expression is true.  “Wether you think you can or you think you can’t….you’re right”. Today’s lesson kids.

Wherever you go.  There you are.