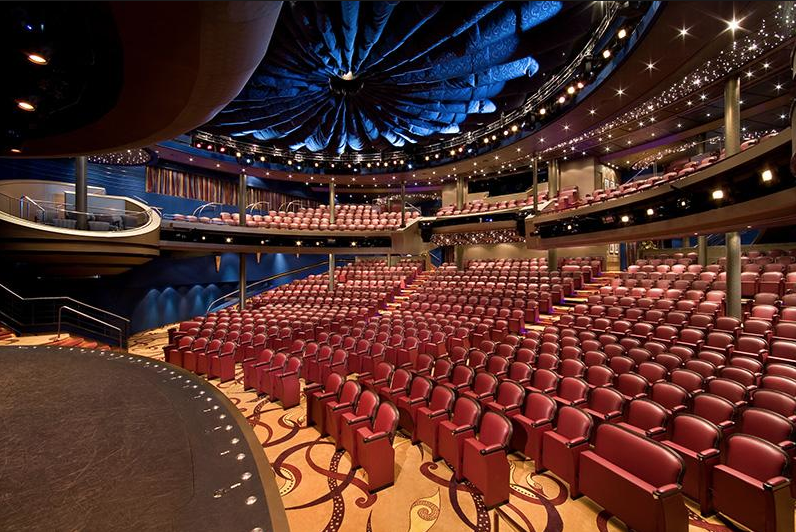 That image is a picture of the theatre I’ll be performing at next week.

There’s a moment right before the curtain opens and you walk out to perform for those thousand or 1500 audience members in the house.  It’s a short moment, maybe a second.  You take a breath, and walk through that red crushed velvet wall, smile and go to work. That’s my favourite moment of all things in professional show business performance.

I like the anticipation. Anything can happen.  An audience decides if they like you in about 30 seconds.  That 30 seconds determines the strength of the show about to follow.  So you better come out on that stage looking and acting like a million bucks. This is particularly true of comedy acts like myself.  “Comedy Magician”, they say, “what the hell is that?”

Have you ever heard it said that right before you die, in a single instant your life flashes before your eyes? That’s sort of what happens when you take that big breath before you walk out from behind the curtain.  In an instant the whole show, everything you hope to do that night, flashes before your eyes. That’s the juice that keeps me going. Its as though I’m in the movie Flatliners, but for comedy and magic.

I leave this Friday for a week to perform on another Holland America Cruise ship out of Ft. Lauderdale, the Eurodam I believe.

I’ll be in Grand Cayman Island, Bahamas, Key West and Cozumel.  It’s a nice tour. I also happen to love performing on Holland America.  The cabins and food are exemplary and the performing conditions are fantastic. The audiences are “my people”.  They’re generally the perfect demographic for my show.  If I had one complaint, I wish they’d close the balcony for the second seating of the show.  Hardly a big deal.  I’m thrilled to be back performing on what I believe to be one of the best cruise lines, with the best stage and tech crews at sea.
After that I come home for a week and then I’m off for two more weeks on Holland America to Costa Rica, Hawaii and San Diego, on some other Dam ship ( HAL joke…it’s even on their shirts ) .  Its the the middle of winter here in Toronto, this is a blessing of a booking.

More than other cruise lines, I find Holland America treats its entertainers best.  It must be a west coast corporate culture thing. Most cruise lines are nice, but Holland really checks it up a notch. I’m grateful to the bookers for using me.  It’s a trust thing.  They trust that I’ll absolutely deliver the best show those passengers have seen and I’ll make them laugh and be amazed for the length of my performance. In turn, I trust that they’ll pay me and treat me like a professional. So far, they’ve never let me down.

I hope to see you out there at sea. If you’re in the audience that night take a moment to think of me,  when the lights dim and I’m introduced.  Right as they’re saying my name, know that I’m focused. I’m taking that deep breath. Running over my show in a split second, hoping to make it the best show I can for Holland America, me and most importantly ….. you.