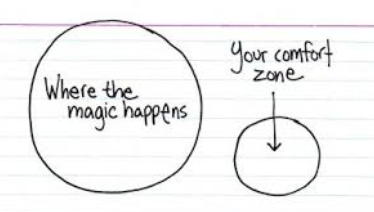 Jeff McBride says “Your comfort zone is the place your dreams go to die”.
I think he’s correct.
I’m currently ¾ of the way through writing a new closing piece for the show.
I know it sounds insane to plunk in a new closer without audience testing it elsewhere in the show, but here’s the thing :
It’s not a comedy piece. There’s zero jokes in it. It’s not even the strongest magic in the show. However, it needs to be at the end. It MUST be.

That’s right, I intend to close my comedy magic show with an autobiographical performance piece. It will neither rely on jokes or magic. The departure from the norm is huge for me. It will be a whole new performing chop, one I’m looking forward to growing. At 44 years old I think I’m finally ready to start letting the audience see more of me than ever before.

To give you a notion of where its heading, the piece begins with “My mom is the toughest person I know. As if the jackboot of the patriarchy pushing down on her wasn’t enough to make life intolerable, my dad died when I was young….”

I know you’re going to say, this will surely kill all the comedy momentum I’ve built up to that point….but I’m not sure that’s true. Do they really need to be laughing til tears right at the end? My now second to the end of the show is the underwear piece… my former closer. That’s a killer. I can often get a standing O on that. They’re laughing til tears then. Why not shift the beat to something real, and have them leave on a real moment? The show has nothing about ME to any degree. The audience leaves being entertained but not knowing about ME. I’d like to change that. I want to connect with them more.

It’s my belief ( and we’ll see in the next few months if this is true ) that to really, genuinely connect with an audience and have them feel anything of value, you need be honest and really speak to them. So, I’ll wow and entertain them along the way, I’ll talk about my son and my home a bit… then after the underwear piece, I’ll use the last 3 minutes of the show for a short performance driven closer. I think I’ll get a more genuine standing O with it.

I recently noticed that when I started talking about my son while I was on stage, days later people would come up to me in public to tell me they liked the show and all that jazz… but they would also mention Ferris, my son. They’d often call him by name and ask about him. That’s when I realized just briefly talking about my kid connects with an audience, maybe more than anything else I do. So simple. So true. I never realized it. I was too busy coming up with clever jokes. I missed the forest for the trees.

The point is this. Grow or die. Your audience needs to see more of you on stage. Connect with them, it’s what people are paying that ticket price for. I don’t mean that Copperfield bullshit about how you never saw it snow when you were a kid. I mean, the closer to the bone of who you really are will be the thing that gets you across the finish line.

So…. sit back, grab a glass of scotch, throw on The Cure. Pick a cool track like Fascination Street and write some new stuff ..…. You’ll be thankful you did and closer to the artist you want to be.
Until next time,
Good Night and Good Luck,

P.S.
Here’s something to start you off. A killer track, and a personal favourite of mine. I dated a woman once who loved The Cure. I should have married her for a host of reasons…but that one sure helped 