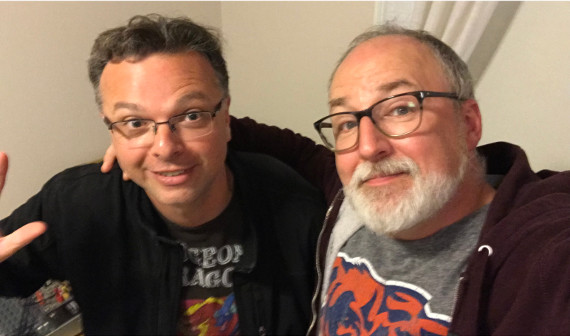 Comedy in a Corporate World

I was lucky enough to be interviewed on Todd Van Allen‘s podcast Comedy Above the pub. I haven’t got to perform with Todd in like 20 years, so its really great to see an old friend who I never see. We talk comedy festivals, joke writing, magic IN comedy and at the 15 min mark a story about David Acer who’s a brilliant magician, comedian and comedy club owner. I’d forgot this story happened to me probably 25 years ago. The interview is basically a lens to look into how comics talk in the car on the way to gigs. Thanks Todd for makin’ it easy.
Its long, about an hour and a half, long form interviews are great. I think I’d like to let the interview speak for itself, but check out the podcast for the best interviews in the world of comedy, music, and the business.
If you’re a magician and work in comedy or thinking about becoming a comedian who uses magic, this might lend some insight into that world.

PS. The show ends with a song from a GREAT band, The New Fast Automatic Daffodils… one of those bands no one ever heard of but should be known WAY more. They need more people to rediscover them. So here. Listen to this: