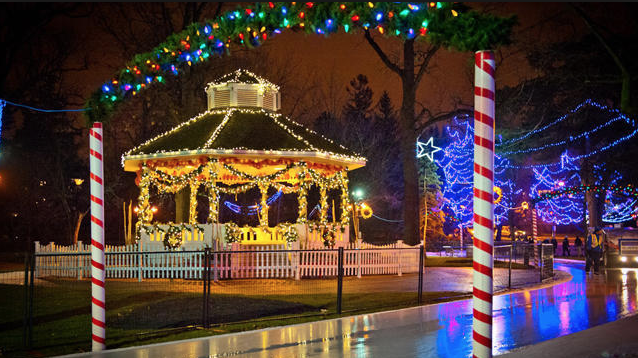 Signs at the Airport say “ All roads lead to Brampton”. Its true.

My family moved to Brampton in 1981. I went to Kingswood Drive, Sir John A McDonald and then Central Peel, where I fell madly in love with a girl who would never love me back. She vanished off the face of the earth, plaguing my curiosity forever as to her whereabouts.  My only job EVER was an usher at the movie theater at Vodden and Kennedy in 1989 / 91. I still love late night Sonny’s burgers, Skating at Gage Park, that one Dairy Queen we have downtown and the wee smoke shop.  I guess that’s my heroic flaw, my excess of civic pride.

I’ve never moved away from Brampton.  Even when I owned a home in Toronto, I also maintained a place here.  I don’t think I’ll ever leave, no matter what happens to the city. I love my house and where I’m at now. My son was born here. There’s a lot of promise for Brampton in the coming years.  I’m one of those hopeful people that think city hall will get it together for us. So many memories here. I jog along the Etobicoke trail, by the creek. I can see Kingspoint mall and Barronwood court along the way.  First time I kissed someone was in Barronwood court. It’s fun to be flooded with memories both good and bad, every single day.

Here’s the thing. I’ve been fortunate enough as a comedian and magician, that my talents have been sought out around the world. I’ve performed in over 45 countries, on international television and radio shows and headlined some of the planets largest and newest cruise ships on Holland America and Royal Caribbean. World class corporate conference and conventions hire me to perform at their after dinner events.  I’m incredibly lucky.  It’s true, I’ve never had a job.  Comedian, Magician, Writer.  That’s all I’ve ever done. Not bad for a Brampton kid.
All that is to say, as I get older I want to spend more time performing here.  Sadly, I almost never work in Brampton. Its where I started. I won a comedy competition here in 1990 that got me a spot at the Laugh Resort comedy club in Toronto that started my Stand Up career. My first paid magic shows in my teens were at Shoppers World, Centennial Mall and Libraries like the one at the 4 corners. My first paid stand-up comedy show was at Vodden and hwy 10 in a place called the Boondocks, and I did that show with Russell Peters. He and I have remained friends ever since. I miss the feeling of performing in my home town.

I’ve performed at the Rose theatre, and had a sell out experience, but that venue is very expensive ( and union houses often are ) to rent, pushing ticket prices too high for people to be able to come out regularly. For some reason the Rose will NOT hire me to work their performing arts series. Its madness. Consequentially I’m trying to find another venue in the city. A small public space to perform at maybe once a month.  Offer inexpensive ticket prices where locals can come and see me perform new and classic routines…. Magic they’ve never seen before, and have a laugh too. I’ll bring in other performer friends to share their talents and make it something unique.  I’m currently looking at places like J Red and Co. Ironically THE physical location of The Boondocks where I worked with Russell Peters so many years ago.

I’m not sure where the show will be, but it’s coming soon, and I hope to see you there.  If you’re from Brampton, I’d very much like it if you joined my mailing list or just shoot me over an email and I’ll put you on the list. I’d like to be able to notify the people of Brampton when the show starts, and give offers for free tickets and other cool things. Additionally, if you have any ideas for the location of the show, PLEASE contact me. I’m always interested. The Bramptonist has been good to me with press, so I’ll likely announce it there. Keep an eye open….